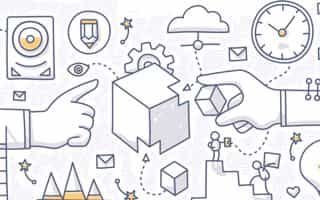 Is it only my feeling or is it that all business leaders those are not offering Cloud are commenting against cloud. Although what's said is common sense, still I do not understand why businesses fail to see these simple issues.

Red Hat's CEO: Clouds can become the mother of all lock-ins Cloud architecture has to be defined in a way that allows applications to move around, or clouds can become the mother of all lock-ins, warned Red Hat's CEO James Whitehurst. Once users get stuck in something, it's hard for them to move, Whitehurst said in an interview. The industry has to get in front of the cloud computing wave and make sure this next generation infrastructure is defined in a way that's friendly to customers, rather than to IT vendors, according to Whitehurst. Lock-in comes in many different guises, including the inability to move workloads among different clouds, the difficulty of extracting data from the cloud and being forced to use the underlying virtualization platform chosen by the cloud provider. Cloud Computing Deep Dive Red Hat is focusing much of its efforts on the first of these potential issues. Certifying cloud partners is the most important thing Red Hat has been working on this year, according to Whitehurst. Making sure workloads are mobile in the new cloud-based environment is critical, Whitehurst said, and that is what its Premier Cloud Provider Program is about. "Our customers can run the workload in their data center or migrate it to multiple cloud providers... and we'll support you on it and your ISVs will support you on it," said Whitehurst. The cloud certification program was announced last year, and Amazon Web Services was the first cloud provider to get certified. Since then, NTT and IBM have been added to the list of certified partners and more are on the way, according to Whitehurst. For a cloud provider to be certified it has to use a virtualization platform based on VMware's ESX hypervisor, Microsoft's Hyper-V or Red Hat's own hypervisor, which is based on KVM (Kernel-based Virtual Machine). To be able to move a workload from a data center to a cloud or between two clouds, a connecting API (application programming interface) is needed, and there are a plethora of different ones being developed. Fewer would be better, according to Whitehurst. However, the real challenge isn't the API, but ensuring that the application will run with the same performance when it has been moved. That is what Red Hat is focusing on. Getting an API in place that allows a workload to be moved is only 10 percent of the work, Whitehurst said. The next step is also being able to move also licenses along with the workloads, according to Whitehurst. In April, Red Hat announced Cloud Access, which will let enterprises use their subscriptions to support either traditional on-premise servers or servers hosted on Amazon's Elastic Compute Cloud. Red Hat isn't the only company that wants to make it possible for companies to move their workloads among data centers and clouds. For example, VMware is developing the vCloud Service Director, previously code named Project Redwood. However, the tool is still being beta tested, and the plan is to ship it before the end of the year, according to Richard Garsthagen, senior evangelist at VMware in Europe, the Middle East and Africa. via Red Hat's CEO: Clouds can become the mother of all lock-ins | Cloud Computing - InfoWorld.

At Aquevix we don't hate the cloud. We simply are more cautious to not get wet when it bursts.